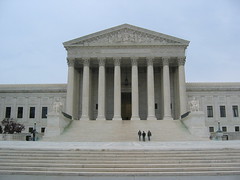 The Supreme Court ruled this week that obeying federal regulations does not protect a company from lawsuits.

A federal regulation that allows automakers to choose what kind of seat belts to install in minivans does not protect the companies from being sued if they pick one that is less safe, the Supreme Court ruled Wednesday.[Source]

The justices ruled unanimously on the issue allowing a lawsuit filed by the family of Thanh Williamson, who was killed while driving a 1993 Mazda MPV Minivan, to go forward. Ms. Williamson’s family has blamed the use of a lab belt, rather than a shoulder-and-lap belt