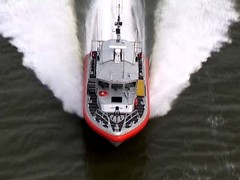 The safety of fast boats is being questioned in a lawsuit related to the death of an 8 year old San Diego boy, Anthony DeWeese. The young boy was killed in December of 2009 while watching the San Diego Bay Parade of Lights with his family. The pleasure craft holding the family was struck by a Coast Guard boat that was en route to assisting a stranded craft. Five others were injured. [Source]

Eyewitnesses spoke of the speed of the Coast Guard boat immediately after the accident.

“What were they doing going furiously fast like that? I couldn’t believe it,” leisure boater Breck Schoch, who rushed to the scene right after the crash, said last night. “I think the Coast Guard has a lot to answer for what happened. I’ve never seen a boat at such a blazing speed in that area.” [Source]

According to a San Diego Union-Tribune article, high speeds have been the cause of two accidents and fatalities since 2001. The center of the debate lies in Coast Guard training:

“The real blame for this accident lies higher up with the Coast Guard for a lack of supervision, lack of training, lack of command and control, the failure to clearly point out in their training manual that there’s a distinct lack of visibility in these boats,” Neil said.

“This boat should not have been used on the bay that night, or any night,” he said. “It still poses a risk to other boaters when used in congested bays and waterways while the operator simply cannot see when coming up to speed.” [Source]

Four members of the crew were charged with misconduct after the death of Anthony DeWeese. The pilot of the boat was convicted of dereliction of duty and sentenced to three months jail time. According to their attorney, Mike Neil, the  family is “moving forward with a negligence and wrongful death lawsuit against the government and believes the dereliction of duty charge could help their case in civil court.” [Source]